In February I headed back down to Ajijic for the Scotiabank Northern Lights Music Festival. I had such a great time last year, that I was excited to go back- both for the music, and for the weather. It is exceptionally beautiful there, and the people are always great. Not only is it an amazing musical experience, it is also a fun time!

I managed to snap a million pictures with my trusty phone, and wanted to share some with you! The following photo was awkward to take as I was hiding behind a pillar while everyone else was rehearsing. I was supposed to be warming up for my rehearsal with the orchestra, but as usual, I was walking around taking pictures instead. I promise that I do actually warm up, just not all the time, and especially not when there are more interesting things to look at :-p 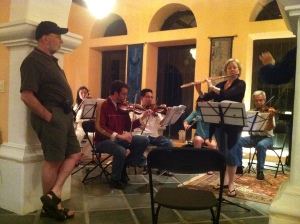 Christos looks on as Sue and the Festival Orchestra rehearse his flute concerto!

Another exciting fact for me was that my parents were coming to visit me in Mexico. They had never been to Mexico before and had decided to make the huge trek from Korea to Mexico while I was there. They arrived the day of my concert, and I thankfully ran into them before the concert, otherwise I would have been worried sick that they had been I mean parent-napped. 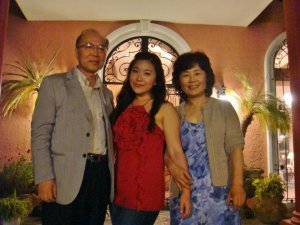 The Four Seasons was a really exhilarating experience- I know it must seem like every performance is fun(or at least I hope it seems so), but honestly, some performances are more fun than others. It was great to play with an orchestra full of friends. I knew each and every one of them, and whenever we had parts that were conversational or interactive, I couldn’t help but smile and laugh. I’ve played the Vivaldi several times before, and with different orchestras/ensembles, but this was definitely the most fun I’ve ever had! 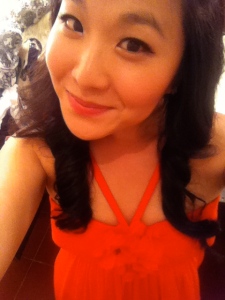 Backstage in a flower dress- going with a nature theme for the 4 Seasons, yes, I actually thought of that… I am a major dork!

The true beauty of the festival is that everyone really becomes close friends- we eat all of our meals together, play chamber music together, teach students, and talk about music and life all night over drinks :) I am really happy to have had a good time there, and hopefully my schedule will allow me to return soon.